These articles are usually about people who own Wellhouse campervan conversions, hence the name ‘Wellhouse Owners’. But in this special article we meet the man who started it all, the owner of Wellhouse – founder and CEO, David Elliott – to find out more about him and his passion for campervans and how, almost 20 years ago, he ended up starting what is now one of the UK’s most reputable and best loved campervan converters.

David, it seems, was always destined for a life in the motor trade. From a very young age, he had the campervan bug and, being a self-confessed petrol head, it’s not hard to see why converting campervans became the perfect vocation for him.

“I was born in the vintage year of 1971 and I suppose I was destined to become a camper manufacturer,” he said. “My very first memory is being at the bottom of the Eiffel Tower in my dad’s Austin Paralanian motorhome. That was in 1974 and we were parked right under the Tower back when you could get that close.

“My dad was a van driver in the 70s and I have great memories of my childhood going to Bridlington and other places on the East coast for weekend holidays – when weekends meant family time. My dad liked to look around motorhome dealers and I always remember the excitement of visiting them. I think it was because I always thought it was some sort of adventure but, looking back, I doubt there are many 7-year-olds that enjoy looking at motorhomes!

“Around 1977 my dad went self-employed which meant we had to sell the motorhome. I still remember the day that happened and the new owner driving away in it. That first one was followed by a couple of other motorhomes in the early 1980s and, it’s fair to say, the motorhome seed was well and truly planted.”

A few years later and a 16-year-old David, like most teenagers, was eagerly awaiting his first opportunity to get behind the wheel as a legal driver… although his first drive wasn’t in a typical first vehicle.

“I remember it vividly. September the 5th 1988 11.45pm, 15 mins before my 17th birthday. I was sat waiting for midnight to strike so I was legal to drive. I’d waited 17 years for this moment and my first drive was in … a beige Sherpa Autosleeper! It’s fair to say, it wasn’t how I’d pictured it!”

And from that point, David became submerged in the motor trade world…

“Ever since I was 17, I have always bought and sold cars, caravans and campers. I’ve had my fair share over the years. From 1998 to 2004 I bought and sold Hymer motorhomes from Germany and had many great holidays in them. I even owned one for a few years and loved it. The problem was it was 20 odd foot long, so not the easiest thing to park.

“After that I had caravans for years. I always liked to get to where I was going – normally Italy – and then stay in one place. Caravans are great, but towing can be a chore and you do not have the freedom of a camper or motorhome.”

“In 2008 I bought an old 1972 VW Westfaila Camper that needed restoring. At that time we had our own body shop, so it had a full restoration. It’s been many years in the restoration stage and it’s just about done. If it was not for COVID, 2020 would have been a year of going to shows in it. I love driving the old VW, hardly any heating in the winter, no power steering, slow but great character.”

Restoration his old VW has not been the only challenge David has faced with a campervan. Wellhouse-built campers have served as support vehicles on David’s many charitable pursuits around the country.

“Campers have come in handy for the various marathon challenges I’ve done in the past. I’ve done two, 10 marathon in 10 day challenges and a 7 marathons in 7 days challenge. Later this year I will be attempting Land’s End to John O’Groats, and I’ll be using one of the campers as a support vehicle for that.” 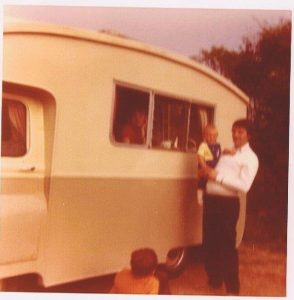 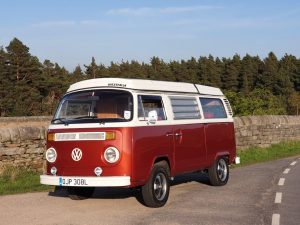 One of my old vans 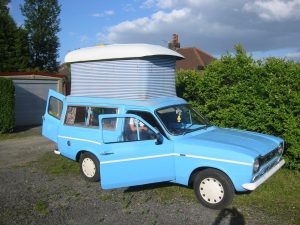 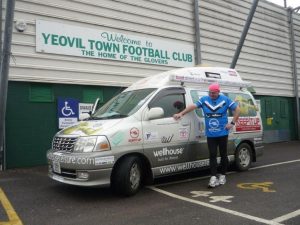 We all have a favourite view and this is mine. It goes back to 1981 and its at a place called Gabbice Monte looking down to the towns of Riccione, Misano & Rimini. This is where we get some of the camper names from (Italian towns). We used to go to Misano when I was a kid and I took my kids when they were little. 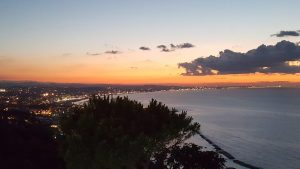 A few years ago – as part of the midlife crisis – I decided to have a VW T2 tattooed on my back. 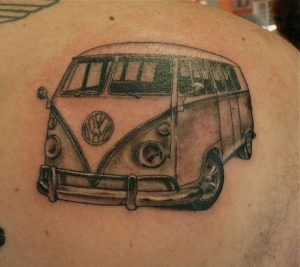 My old Hymer S670 built on the Mercedes 410 chassis with a 5cyl 3.0 non turbo diesel engine. Slow to drive but it will be around long after I have gone! 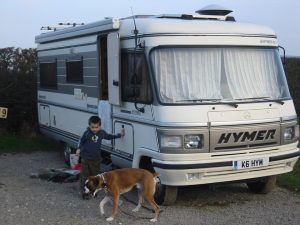 One of my Caravans. 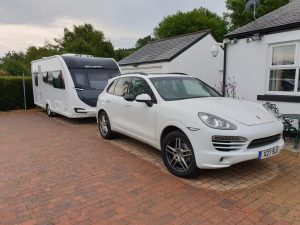 My favourite campers/motorhomes (excluding ours!)

I have visited the Dusseldorf Caravan Salon 21 years running, the Stuttgart show for 10 years, the NEC shows for 20 years and even been to Tokyo and shows in the USA. I’ve seen just about every caravan and motorhome in the world, so it’s really hard to say as I’ve seen so many. 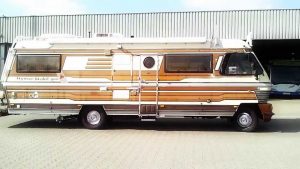 Couple of makes here. The old German RMB from the 80’s and 90’s and for a UK brand, Autosleepers, as some of their designs are great. They are probably the best British manufacturer (after us of course 😊) 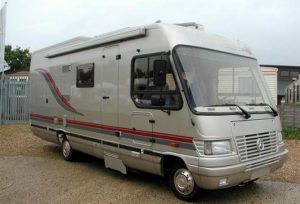 Dehler VW was a German boat builder who went into making campers. Problem was they were that good and expensive they sent the company out of business, but they were very clever. Also for a bigger van conversion the 1980’s Westfalia VW LT and old Mercedes were built to last forever and great designs. 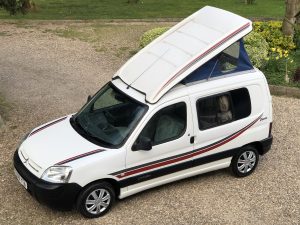 This as like trying to choose between your children. It wasn’t easy because, after nearly 20 years, we’ve had different ones from different eras, but here are a few of my favourites and not all of them are the expensive ones.

Toyota Granvia Special edition. This had a bodykit and it looked fantastic. It came back in p/ex around 2 years ago and still looked as good as it did when we first converted it. 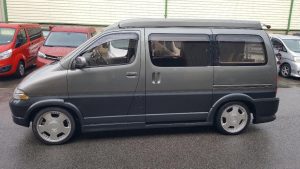 Toyota Hiace. These were great vans and we did some new and nearly new ones in around 2006. Only 4.8m long but with high top so you could get a lot in them. Ford Rosso & Martini. These are a couple of special editions we did. The Rosso was one of the first colourful ones we produced and I still love the Terrier one – an almost retro design. We converted the Martini around 3 years ago and covered the conversion in leather! it looked amazing. 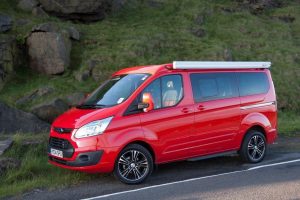 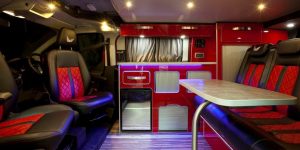 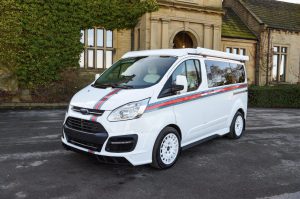 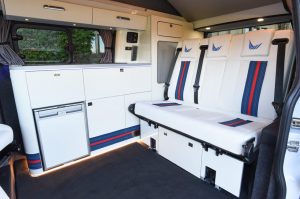 The latest Ford Custom trail versions are great with a bit of off-road capability as well. We did one recently with double glazed windows. Not to everyone’s taste, but I loved it. Our conversions have become synonymous with modern design and outstanding build quality. Here at Wellhouse Leisure we have a simple philosophy – provide our customers with a better standard of service and value for money than anyone else.

Working On Behalf Of

As well as conversions, we also work on behalf of numerous industry-leading brands, including Ford, Toyota, Nissan and Honda

Enter your details below and we will get in touch with you about a factory tour.

Websites are great for sending information and showing what Wellhouse do but you can’t beat a phone call and its always better to speak with us ahead of a visit so we can discuss in more detail what we can offer and your requirements.