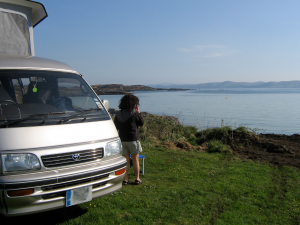 Campervans are a great utility vehicle offering the freedom to pick up and go whenever the mood takes you. This has certainly been true for Tony, Charlotte and their daughter, although they have used their 15-year-old Toyatoa Hiace for a whole host of things besides just travelling.

“Summer 2021 will be 15 years since we bought our van, newly converted by David and the team at Wellhouse,” said Charlotte. “The van itself is 26-years-old and still running well. The conversion is also still in great condition. A great testament to the high-quality vans and conversions at Wellhouse!

“The van is our only vehicle and has also been a great workhorse: putting the bed down and using it for multiple flat removals; transporting 3m scaffolding boards, furniture, lawnmowers; trips to the recycling centre and (very cautiously!) to pick up manure for the allotment!”

Of course, Charlotte and Tony have had trips to more exotic places than the recycling centre. Living in Glasgow gives them access to Scotland’s magnificent countryside, but they also enjoy travelling further afield.

“We live in Glasgow with beautiful countryside easily accessible from here,” added Charlotte. “We wanted to spend time outdoors, away from the city, to explore new places and for our young daughter to have the freedom to be outside and take friends camping.

“Our favourite place to stay with the van is the west coast of Scotland and particularly Morvern, but we have travelled all over the UK with it and enjoyed holidays in France.

“It is very relaxing to have your home with you as you travel and it has enabled us to have longer holidays and many weekend and day trips on our own or with friends and family.

“Both my 40th and 50th birthdays were celebrated with van trips by the sea and we have enjoyed staying at bluegrass festivals in Moniaive and Arisaig,” she added. “Thanks to the Webasto heating we stay cosy in the van all year round.” 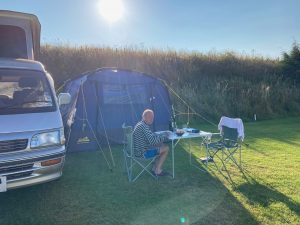 Charlotte says the Wellhouse is still going strong after many years, but why choose Wellhouse in the first place?

“Like many customers we had found the VW vans to be too expensive and the used campervan market with high prices, high mileage and worn interiors,” said Charlotte.

“Tony’s Dad (who had owned a Toyota Hiace camper in the 1980s) sent us a newspaper clip about Japanese import vans and so we researched companies and were impressed by the many good reviews of Wellhouse conversions and the strong relationship Wellhouse had with their Japanese colleagues.

“We travelled down from Glasgow to Wellhouse on the train and, after seeing the vans and David’s straightforward, no hard-sell approach we chose a van still in Japan and put an order in for the conversion.

“We also bought a Khyam Motordome awning via Wellhouse, which was a useful addition for longer holidays and is still on the go, having put up with some heavy storms on the coast of Scotland.

“We hadn’t really thought about the van design, but the sliding door and windows give a wonderful panoramic view and lots of light.

“We continue to enjoy the van and David and the Wellhouse team have been great over the years whenever we have sought their advice.”

Our conversions have become synonymous with modern design and outstanding build quality. Here at Wellhouse Leisure we have a simple philosophy – provide our customers with a better standard of service and value for money than anyone else.

Working On Behalf Of

As well as conversions, we also work on behalf of numerous industry-leading brands, including Ford, Toyota, Nissan and Honda

Enter your details below and we will get in touch with you about a factory tour.

Websites are great for sending information and showing what Wellhouse do but you can’t beat a phone call and its always better to speak with us ahead of a visit so we can discuss in more detail what we can offer and your requirements.